While known mainly as an athletic shoe and apparel company, Nike has many products geared toward the athletically inclined or those wishing to be. One such offshoot of its product line is the HyperFuel Nike Water Bottle sold in both 24 and 32-fluid-ounce sizes. Whether playing in a sporting activity, working out at the gym or just getting your required water intake throughout the work day, the Nike HyperFuel 32-ounce water bottle has you covered. A unique feature is its puff valve that allows you to squeeze and drink with one hand, which is especially useful if you are drinking on the go. This also is helpful for football players or other athletes who need to drink without removing their helmets.

Squeeze sports bottles are common on the market, but this one offers a unique bottle design. The design fits nicely into your hand for easy gripping. The slightly angled waterspout makes it easy to drink without having to tilt the water bottle too much.

Saving the Environment and Your Wallet

Sports water bottles are not only convenient, but regular use of them can also go a long way to help save resources and keep disposable plastic bottles out of the waste stream. On average, Americans use 167 disposable water bottles a year, but only about 38 of them get recycled. More than 2.5 million plastic water bottles are thrown away every hour according to the American Chemistry Council. If you were to line the bottles thrown away each year end-to-end, it would wrap around the earth 190 times. This waste stays around for generations. It is estimated that it takes 1,000 years for one plastic bottle to biodegrade.

If you drink the recommended eight glasses of water a day, you could spend about $1,400 per year on disposable water bottles. That $8-20 investment in a reusable water bottle, such as the Nike HyperFuel, can add up to huge savings if you use it regularly. The cost of running the same water through most taps in your home would only add up to a few dollars a year. If you are concerned about contaminants in your water supply, many affordable water filtration products are available to help take out unwanted particles and chemicals. Many people buy bottled water because they think it is better for them than tap water. This simply is not true. Some bottled water is simply drawn from taps and not the mountain springs the companies lead you to believe. Public water systems are regulated by the Environmental Protection Agency, which requires multiple tests daily for bacteria and other toxins.

Peace of Mind With BPA-Free

The Nike HyperFuel Water Bottle is BPA-free, but what exactly does that mean and why should you care? BPA stands for bisphenol A. This industrial chemical has been around since the 1960s to make certain resins and plastics. It is a common component in polycarbonate plastics often used in food containers or in resins that coat the inside of food cans. Studies have shown that BPA can seep into beverages. This is a concern because of possible health risks, including a negative impact on the prostate gland and brain of fetuses, infants and small children. Some studies also show a likely connection between BPA and high blood pressure.

The Food and Drug Administration has stated that BPA is safe in very low levels, but why take the risk? The Nike HyperFuel Water Bottle is BPA-free, so this is one less thing you need to worry about. 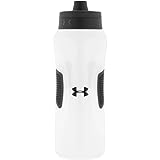 Nike is widely known for its sports apparel, especially athletic shoes. But if you are a Nike fan, you may want to consider adding the HyperFuel to your collection or one of the other sports water bottles offered by the company. The sporty Nike logo is featured prominently on any of the bottles it offers. Unlike the other bottles Nike sells, the HyperFuel is especially useful for hydration in the heat of a game, practice or jog around the neighborhood without having to fumble with flipping up a drinking straw or untwisting a cap. Simply squeeze the bottle for a refreshing drink of water or any other beverage.

As far as sports bottles go, this one is fairly typical, yet functional and durable. If you are into sporting the Nike logo, this is a great option. Other similar bottles can be found that offer the same functionality but at much lower cost. The bottle design does make it stand out from other bottles. The Ergonomic grip makes it very easy to hold, and the slightly angled design allows you to drink with limited arm bending.

Overall, we give the Nike HyperFuel Water Bottle four out of five stars. The higher price for a plastic bottle and the tendency for the logo to wear off are the two main detractions. Other than this, you should get many years of use out of this highly functional and attractive bottle.