For anyone who lives in an area with hard water, a water softener is a necessity of life. Hard water can quickly wear down your appliances, clothing, and bathroom fixtures. To help you decide which water softener is the right choice for you, we have reviewed the Whirlpool water softener. Whirlpool manufactures water softeners in multiple sizes to accommodate different size households. It also has a water softener with a whole-home water filter included. We will take a look at the Model WHES30, their most popular model, and note the capacities of their other models.

What Is a Whirlpool Water Softener?

A Whirlpool water softener is a mechanical appliance that is attached to your home's water supply. It uses a process called ion exchange to remove the minerals that make the water hard, usually calcium and magnesium, and replace them with sodium. This exchange occurs in a tank containing polystyrene beads, called the resin tank. These beads have a negative charge. When hard water passes through the tank, the calcium and magnesium minerals, with their positive charge, are attracted to the beads and pulled out of the water.

Next, a strong brine solution passes through the resin tank. Sodium also has a positive charge, so the hard minerals that are attracted to the beads are replaced by the sodium and go down the drain. This is a very effective method for softening hard water. However, it does leave a faint salty taste to the water that some people may not like.

All water softeners must have a regeneration period during which the tanks are backflushed and cleaned. On some models, this is done automatically, and with others, it can be programmed or timed. Soft water may or may not be available during regeneration, depending upon the model.

How To Tell if You Need a Water Softener

Look for the following signs that you have hard water.

If you have any of these problems in your home, you can purchase a water testing kit from home stores or try one of many do-it-yourself tests found online.

The model WHES30 is a 30,000-grain water softener. It is a single-tank design and connects to plumbing up to one inch in diameter. The single-tank design is a great feature as it takes less space than the two-tank models. Other specs include:

Capacities of Other Whirlpool Models

If you need a larger water softener, Whirlpool carries the following models with different capacities:

It pays to shop around and compare prices for the Whirlpool model WHES30 water softener. Depending upon where you purchase, prices range from $330 to $550. It can be found at home supply stores, appliance stores, and online.

There are numerous water softener products on the market in a wide variety of configurations and price points. We will take a look at a few of Whirlpool's direct competitors in a similar price range and compare features, ease of use, and cost. 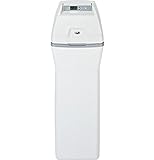 This is a single-tank, 30,000 grain-water softener that is often sold in home supply stores side-by-side with Whirlpool models. We give it the following ratings.

This water softener has a programmable operation that allows you to set the recharging schedule, or it can adapt to your usage pattern. The Days to Empty indicator lets you know when it's time to refill the salt tank. The controls are in a convenient location and easy to program.

As far as water softeners go, this one installs fairly quickly and is not overly complicated. For homeowners who have no plumbing experience or who are cautious about taking on a plumbing job, calling a professional is a good option. For anyone with a bit of handyman skills, this job will take a couple of hours.

Both consumers and professionals alike approve of the GE water softener. It is made of high-quality components and seems to last well. There are a few complaints about O-ring failure, which is an easy repair.

This appliance has a one-year parts and labor warranty, a three-year warranty for the electronic monitor, and a ten-year warranty on the resin tank. This is a generous warranty and should keep homeowners well-covered.

Another single-tank water softener, this system is a 36,400 grain and is also available at home and appliance stores. A nice feature of this tank is the built-in sediment filter and a safety shut-off system. We give it the following ratings.

Once installed, the Waterboss pretty much runs itself. It has a four-button controller that shows the gallons of water remaining until the next automatic regeneration and the regeneration cycle number during the process. The controller measures water usage based upon need, not time, so you don't have to change settings for extra guests or vacations.

This is not a complicated installation for anyone with a little do-it-yourself experience. A handy person can set it up in two or three hours.

While many customers are pleased with their Waterboss 900, it does garner a few more complaints than the GE model above. A frequent concern is that the Waterboss begins to need repairs around the two- to three-year mark and that at five years it breaks down completely and needs to be replaced. This is compared to other water softeners that last ten years or more.

This is a two-tank water softener, so it requires more space than the single-tank models above. You can purchase it online directly from the Fleck company, but that is the most expensive way to do it. It is better to search for other online sources or mom-and-pop companies that carry Fleck products. We give it the following ratings.

This water softener is an easy project for anyone with a few tools and a little experience with plumbing. It should take just a few hours to install.

Fleck has an outstanding brand reputation. It is the gold standard of water softeners. This water softener has high customer ratings, excellent customer service, and longevity.

The Fleck warranty is five years for the control unit and 10 years for the tank. This is an outstanding warranty and one of the best in the industry.

A single-tank 32,000-grain water softener, this Kenmore water softener is available at an attractive price point for households of up to six persons. It's best for moderately hard water, removing hardness of up to 45 gpg. It's a high-efficiency model that uses 35% less salt and 37% less water. We give it the following ratings.

This model is easy to program, and the lighted LCD screen tells you when to refill the salt and how many gallons of water you have left. There is also a monitoring system that tracks daily water usage.

This water softener is similar to other single-tank softeners in installation. It's not a difficult process, but it will take a little time and plumbing know-how.

Kenmore is a reliable brand overall, and this water softener seems to have a good, long life where the mechanicals are concerned. Most consumer complaints relate to the electronic control board, which is prone to fail prematurely.

This Kenmore softener comes with a one-year limited parts and labor warranty, and a ten-year warranty against tank leaks. This is an average warranty. The main concern is that there is no warranty on the electronics past one year.

Pros and Cons of the Whirlpool Water Softener

This is a solid-performing water softener. If you are looking for an affordable, space-saving model, this is a good choice.

If you have the space, however, a two-tank system is the best system for treating hard water. A two-tank system has two resin tanks and one brine tank. This allows the system to switch tanks when you run out of soft water, maintaining an even, consistent, high-quality soft water supply. It can also use soft water for the regeneration process, meaning the tanks are flushing themselves with soft water rather than hard. This keeps those tough minerals out of your softener, protecting the mechanicals from premature deterioration. Ergo, two-tank systems typically last a lot longer than single-tank.

Two-tanks are a little pricier and demand a larger footprint. If these are concerns for you and you have a smaller household that is not likely to make unusual demands upon your water softener system, the single-tank Whirlpool water softener is an excellent choice. We give it four out of five stars.